Josephus and Jesus
By Paul L. Maier, Emeritus Russell H. Seibert Professor of Ancient History, Western Michigan University
Flavius Josephus (A.D. 37 – c. 100) was a Jewish historian born in Jerusalem four years after the crucifixion of Jesus of Nazareth in the same city. Because of this proximity to Jesus in terms of time and place, his writings have a near-eyewitness quality as they relate to the entire cultural background of the New Testament era. But their scope is much wider than this, encompassing also the world of the Old Testament. His two greatest works are Jewish Antiquities, unveiling Hebrew history from the Creation to the start of the great war with Rome in A.D. 66, while his Jewish War, though written first, carries the record on to the destruction of Jerusalem and the fall of Masada in A.D. 73.
Josephus is the most comprehensive primary source on Jewish history that has survived from antiquity, and done so virtually intact despite its voluminous nature (the equivalent of 12 volumes). Because of imperial patronage by the Flavian emperors in Rome —Vespasian, Titus, and Domitian —Josephus was able to generate incredible detail in his records, a luxury denied the Gospel writers. They seem to have been limited to one scroll each since the earliest Christians were not wealthy.  Accordingly, Josephus has always been deemed a crucial extrabiblical resource, since his writings not only correlate well with the Old and New Testaments, but often provide additional evidence on such personalities as Herod the Great and his dynasty, John the Baptist, Jesus' half-brother James, the high priests Annas and Caiaphas and their clan, Pontius Pilate, and others.
Against this background, we should certainly expect that he would refer to Jesus of Nazareth, and he does—twice in fact. In Antiquities18:63—in the middle of information on Pontius Pilate (A.D., 26-36)—Josephus provides the longest secular reference to Jesus in any first-century source. Later, when he reports events from the administration of the Roman governor Albinus (A.D. 62-64) inAntiquities 20:200, he again mentions Jesus in connection with the death of Jesus' half-brother, James the Just of Jerusalem. These passages, along with other non-biblical, non-Christian references to Jesus in secular first-century sources—among them Tacitus (Annals15:44), Suetonius (Claudius 25), and Pliny the Younger (Letter to Trajan)—prove conclusively that any denial of Jesus' historicity is maundering sensationalism by the uninformed and/or the dishonest.
Because the above references to Jesus are embarrassing to such, they have been attacked for centuries, especially the two Josephus instances, which have provoked a great quantity of scholarly literature. They constitute the largest block of first-century evidence for Jesus outside biblical or Christian sources, and may well be the reason that the vast works of Josephus survived manuscript transmission across the centuries almost intact, when other great works from antiquity were totally lost. Let us examine each, in turn.
Antiquities 18:63The standard text of Josephus reads as follows:

About this time lived Jesus, a wise man, if indeed one ought to call him a man. For he was the achiever of extraordinary deeds and was a teacher of those who accept the truth gladly. He won over many Jews and many of the Greeks. He was the Messiah. When he was indicted by the principal men among us and Pilate condemned him to be crucified, those who had come to love him originally did not cease to do so; for he appeared to them on the third day restored to life, as the prophets of the Deity had foretold these and countless other marvelous things about him, and the tribe of the Christians, so named after him, has not disappeared to this day. (All Josephus citations, except the next, are from P. L. Maier, ed./trans., Josephus –The Essential Works (Grand Rapids: Kregel Publications, 1994).

Although this passage is so worded in the Josephus manuscripts as early as the third-century church historian Eusebius, scholars have long suspected a Christian interpolation, since Josephus could hardly have believed Jesus to be the Messiah or in his resurrection and have remained, as he did, a non-Christian Jew. In 1972, however, Professor Schlomo Pines of the Hebrew University in Jerusalem announced his discovery of a different manuscript tradition of Josephus's writings in the tenth-century Melkite historian Agapius, which reads as follows at Antiquities 18:63:

At this time there was a wise man called Jesus, and his conduct was good, and he was known to be virtuous. Many people among the Jews and the other nations became his disciples. Pilate condemned him to be crucified and to die. But those who had become his disciples did not abandon his discipleship. They reported that he had appeared to them three days after his crucifixion and that he was alive. Accordingly, he was perhaps the Messiah, concerning whom the prophets have reported wonders. And the tribe of the Christians, so named after him, has not disappeared to this day.

Here, clearly, is language that a Jew could have written without conversion to Christianity. (Schlomo Pines, An Arabic Version of the Testimonium Flavianum and its Implications [Jerusalem: Israel Academy of Sciences and Humanities, 1971.])
Scholars fall into three basic camps regarding Antiquities 18:63:

Josephus must have mentioned Jesus in authentic core material at 18:63 since this passage is present in all Greek manuscripts of Josephus, and the Agapian version accords well with his grammar and vocabulary elsewhere. Moreover, Jesus is portrayed as a "wise man" [sophos aner], a phrase not used by Christians but employed by Josephus for such personalities as David and Solomon in the Hebrew Bible.
Furthermore, his claim that Jesus won over "many of the Greeks" is not substantiated in the New Testament, and thus hardly a Christian interpolation but rather something that Josephus would have noted in his own day. Finally, the fact that the second reference to Jesus atAntiquities 20:200, which follows, merely calls him the Christos[Messiah] without further explanation suggests that a previous, fuller identification had already taken place. Had Jesus appeared for the first time at the later point in Josephus's record, he would most probably have introduced a phrase like "…brother of a certain Jesus, who was called the Christ."
Antiquities 20:200
This is an extremely important passage, since it has so many stunning parallels to what took place on Good Friday, and yet it seems to be largely ignored in revisionist New Testament scholarship. It tells of the death of Jesus' half-brother, James the Just of Jerusalem, under the high priest Ananus, son of the former high priest Annas and brother-in-law to Caiaphas, both well-known from the Gospels. Josephus's text reads as follows:

Having such a character ["rash and daring" in the context], Ananus thought that with Festus dead and Albinus still on the way, he would have the proper opportunity. Convening the judges of the Sanhedrin, he brought before them the brother of Jesus who was called the Christ, whose name was James, and certain others. He accused them of having transgressed the law and delivered them up to be stoned. But those of the city residents who were deemed the most fair-minded and who were strict in observing the law were offended at this. Accordingly, they secretly contacted the king [Herod Agrippa II], urging him to order Ananus to desist from any more such actions, for he had not been justified in what he had already done. Some of them even went to meet Albinus, who was on his way from Alexandria, and informed him that Ananus had no authority to convene the Sanhedrin without his consent. Convinced by these words, Albinus wrote in anger to Ananus, threatening him with punishment. And King Agrippa, because of this, deposed him from the high priesthood, in which he had ruled for three months.

This, Josephus's second reference to Jesus, shows no tampering whatever with the text and it is present in all Josephus manuscripts. Had there been Christian interpolation here, more material on James and Jesus would doubtless have been presented than this brief, passing notice. James would likely have been wreathed in laudatory language and styled, "the brother of the Lord," as the New Testament defines him, rather than "the brother of Jesus." Nor could the New Testament have served as Josephus's source since it provides no detail on James's death. For Josephus to further define Jesus as the one "who was called the Christos" was both credible and even necessary in view of the twenty other Jesuses he cites in his works.
Accordingly, the vast majority of contemporary scholars regard this passage as genuine in its entirety, and concur with ranking Josephus expert Louis H. Feldman in his notation in the Loeb Classical Library edition of Josephus: "…few have doubted the genuineness of this passage on James" (Louis H. Feldman, tr., Josephus, IX [Cambridge, MA: Harvard University Press, 1965], 496).
The preponderance of evidence, then, strongly suggests that Josephus did indeed mention Jesus in both passages. He did so in a manner totally congruent with the New Testament portraits of Christ, and his description, from the vantage point of a non-Christian, seems remarkably fair, especially in view of his well-known proclivity to roast false messiahs as wretches who misled the people and brought on war with the Romans.
Furthermore, his second citation regarding the attitudes of the high priest and Sanhedrin versus that of the Roman governor perfectly mirrors the Gospel versions of the two opposing sides at the Good Friday event. And this extrabiblical evidence comes not from a Christian source trying to make the Gospels look good, but from a totally Jewish author who never converted to Christianity.
Posted by Juan Cuellar at 3:14:00 PM 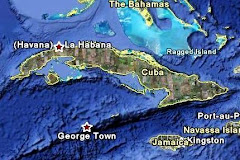